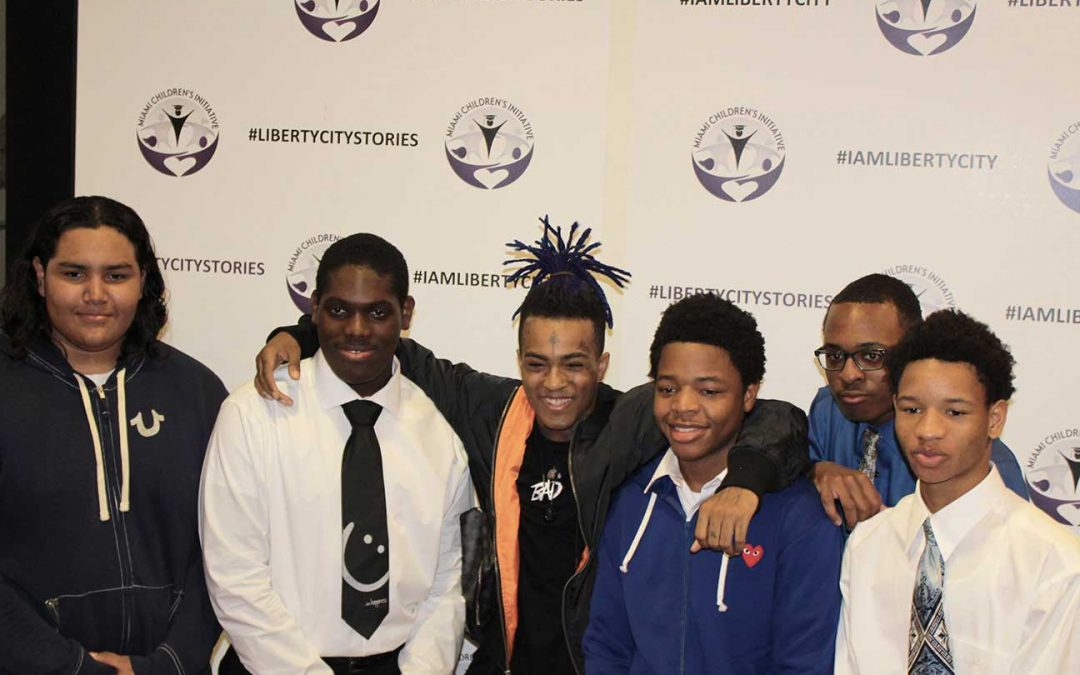 Musical artist XXXTentacion has partnered with the Miami Children’s Initiative(MCI) to make a positive difference in the lives of children living in Liberty City. XXXTentacion, known as X, has a large international fan base which is continuously growing. His recent release of two tracks from his upcoming album received much critical and fan praise (and is sky-rocketing up the Billboard Music charts), and songs such as “Changes reflect a deeper side of the artist. That sentiment is consistent with X’s desire to deliver a positive “coming-of-age” message to his fans; and mirrors his goal of working with MCI to bring about a positive change in the Liberty City community. X recently visited the Liberty City blocks impacted by poverty and violence and met with students at both Charles R. Drew K-8 Center and Miami Northwestern Senior High school to listen to their stories and see how he can be a positive influence in their lives moving forward. By serving as an ambassador to MCI and committing to at least 5 events this year, X wants to bring tremendous awareness to their goals of turning Liberty City into a prosperous community and ensuring educational services are available to the youth.

X, whose real name is Jahseh Dwayne Onfroy, grew up in challenging conditions. He feels a deep connection to the children in Liberty City and believes his voice is credible because he shares a very similar background. “I understand what it feels like to struggle as a kid growing up with absolutely nothing. I hope I can share my experiences and explain that education along with pursuing your talents are the only ways out. I also want the kids to know that their immediate surrounding does not have to dictate their future”. X is committed to this alliance with MCI because helping others is a huge part of his successful rehabilitation after facing his own controversies. “I’ve made some mistakes but I’ve learned a lot. Now, I’m very passionate about working with the staff at MCI and inspiring others to stay on the right path and find their talents.”

MCI has enjoyed various strategic partnerships over the last few years that have provided support to this impoverished community, which was recently spotlighted in the academy award winning film, Moonlight. Over 62% of children below age 18 in Liberty City live below the poverty line, which is higher than 95% of all U.S. neighborhoods. This statistic has been one of the main draws for X who believes that by investing time and resources in Liberty City, it’s possible to give the youth the opportunities to excel and ultimately elevate this community as a whole. “

A series of events are being planned to foster a sense of community, generate awareness and raise revenue for the much-needed services and educational opportunities. These events will include: A College Tour, Leadership Trip, a Family and Community Event, an Ice Cream Social, and Flag Football Games, as well as other events, to be announced, that will benefit the Liberty City community.